What does one say after a long hiatus? I could say nothing at all, but a few things led to my personal hibernation from Bella Vogue: 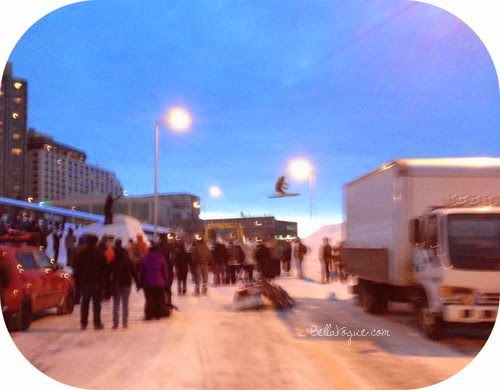 A skier jumps during Fur Rendezvous Festival in downtown Anchorage.

I have immensely enjoyed being unattached to the Internet, and have been actively participating in all things Anchorage. One of my favorite events this year (so far) has been Fur Rendezvous Festival. The annual event took place near the end of February.

Known as "Fur Rondy" to locals, the week-long winter carnival may be the best in the United States. Fur Rondy offers a variety of activities, from dog-sled races to a chance to run with reindeer. My sister happened to be in town during this year's winter carnival, and we made it a point to visit the Snow Sculpture Competition. 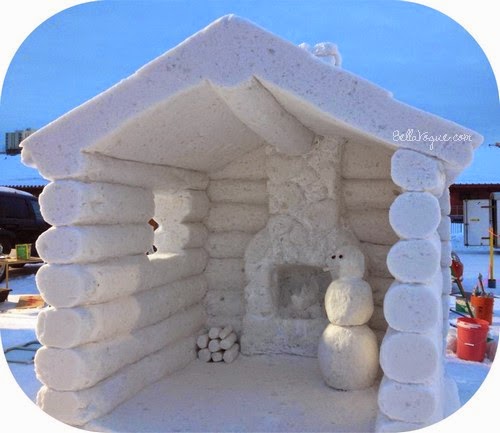 A "Log" Cabin snow sculpture. The competition at Fur Rondy was sponsored by GCI.

Something else that has kept me on my toes?

I changed jobs, as well as companies. I am now working for Pandora, the Danish jewelry company that specializes in sterling silver, 14k gold, and two-tone charm bracelets. Other product categories include necklaces, pendants, and earrings. I love working for Pandora, as I have always enjoyed helping people find things that make them (or loved ones) happy. Charms are a great way to share one's triumphs in life. I should note that as a Pandora employee, I am not required to post anything about them. If I happen to, it's because I want to.

Speaking of things I do because I want to...my current obsession is photographing Alaskan sunsets. I take the bulk of my sunset shots from the roof of the 5th Avenue Mall Parking Garage, as I walk from my car after work.

Looking to Mount Susitna, the sky takes my breath away as the days gain more and more light. Mount Susitna is known as the "Sleeping Woman," and legend says she is dreaming of her fallen warrior's return. 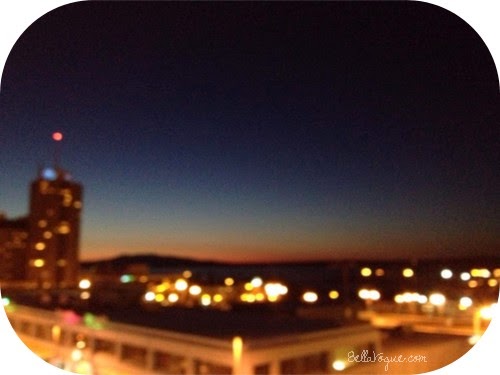 Can you make out the shape of the Sleeping Woman from this blurred shot? 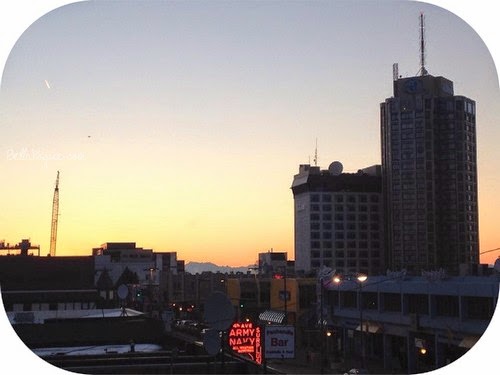 Urban Wilderness: someday I shall paint the Anchorage skyline.
Until then, I will litter my Instagram feed with its stark contrast of color and concrete.

Painting is currently the most relaxing activity I partake in. . 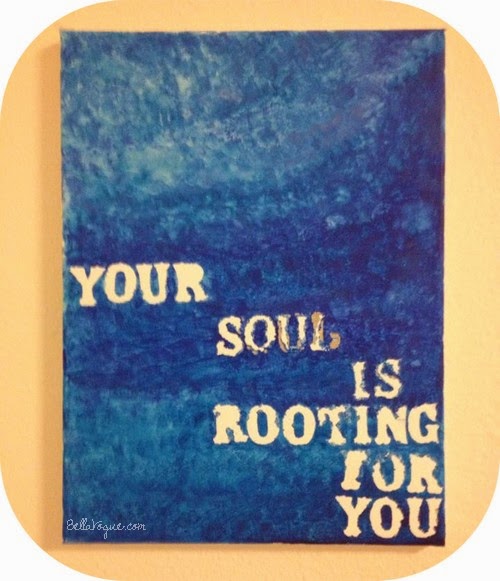 I named the above piece "Alaska in Winter," for I was going to fix the letters in order to make the piece a tad more legible. Then I realized that would be like the state of Alaska fixing the road service markers. I get anxiety from trying to tell which lane of traffic I'm supposed to be in on a wintry day. Painting helps.

So does blogging. As I emerge from my self-induced hibernation, I look forward to sharing my adventures--fashionable or not--once again.
Cheers, That Chelsea Girl™ at 11:53 PM 1 comments Labels: Alaska, Anchorage, Fur Rondy, paint
Email ThisBlogThis!Share to TwitterShare to FacebookShare to Pinterest

It's A Hair Story.

The 18th of June marked my first anniversary with my husband. 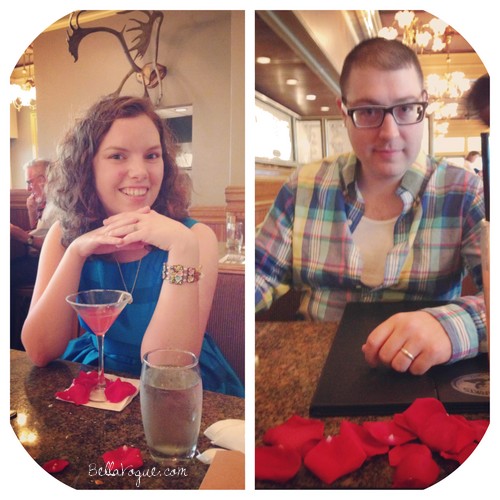 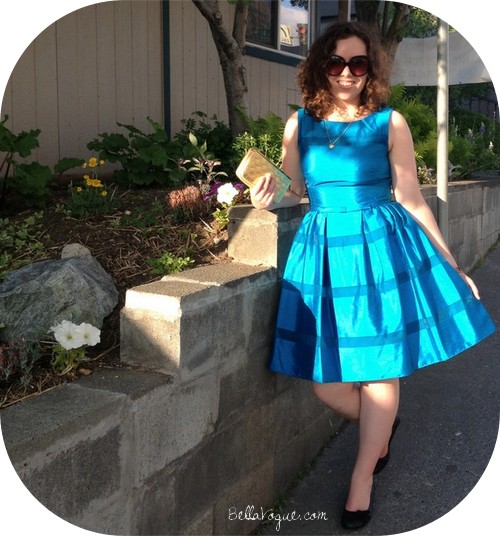 While getting ready for our dinner at Simon and Seafort's, a seafood restaurant that has won several "Best of Alaska" awards, I realized it has also been over a year since I cut off a good length of my hair. 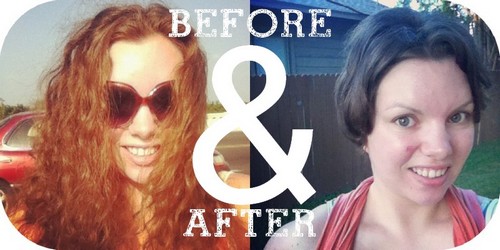 Initially, I cut my hair because it made sense: without a car, I was walking in the Texas heat every day. My thick, long curls carried more weight, more sweat, and took longer to naturally dry (I have never liked using heat on my hair; I don't even own a blow dryer). 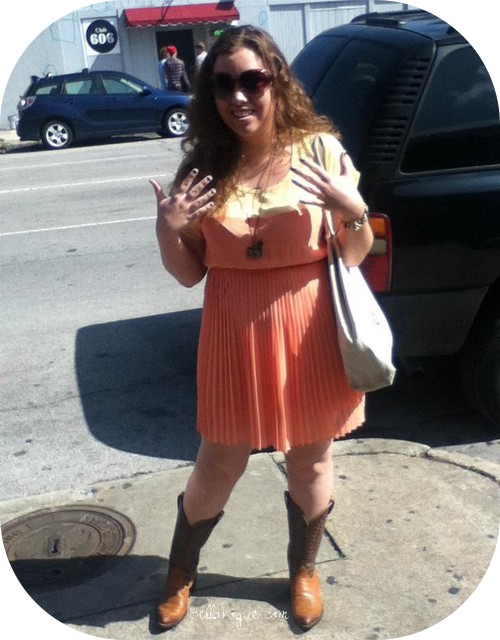 I wasn't nervous or scared when I told the stylist to cut so much. She kept asking me "Are you sure? I don't want you to be mad at me!"

My short hair got a few responses from people at my place of work at the time; one of the television hosts I was working with told me that I was "very brave for such a drastic change."

I didn't feel brave. The only thing I felt after was surprised: my cut locks revealed hair that had not been damaged by the sun, wisps of hair that were much darker.

Then, as I adjusted to having shorter hairstyle, I felt an appreciation for my natural curls. I had tiny tendrils I had never noticed before. I could style my hair without using a number of products, I could use a Shampoo Plus Conditioner, and I could just shower and go! It was amazing. 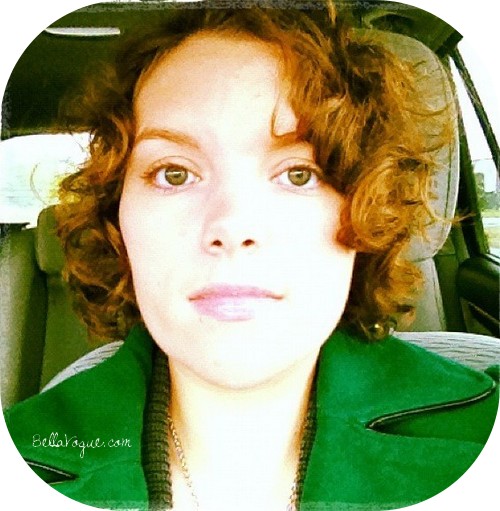 Now that my hair is longer, I may one day cut it short again. Right now my goal is to learn how to style my longer hair: I've never been great at braids or fancy hairstyles. I would like to be, though. Maybe, in another year, I'll be blogging about that accomplishment! 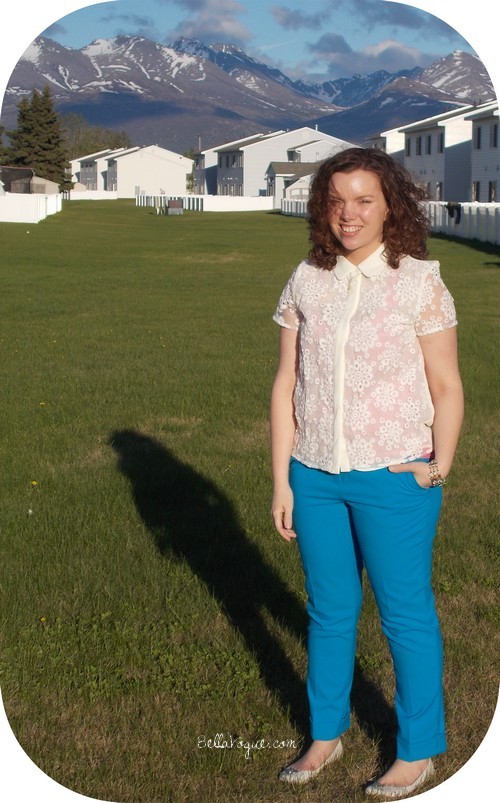 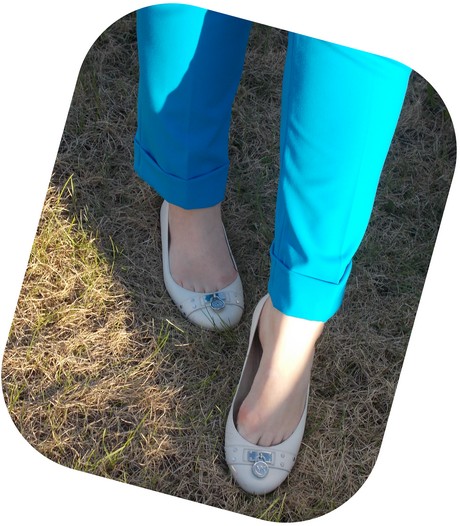 I wear these shoes (and these Vince Camuto pants) all the time at work! Both are ultra-comfy. 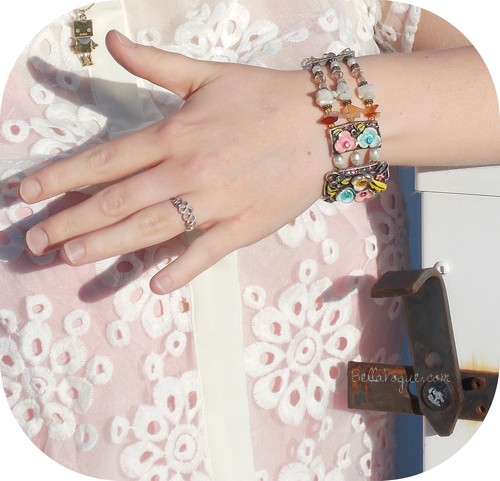 My favorite bracelet, from a gift shop in Borrego Springs. My sister gave it to me a few Christmases ago!
My necklace came from Blackbird Clothes & Curios, in Austin (now closed).

I Spy: Summertime in Alaska!

I know Summer Solstice isn't for a few more weeks. However, after the longest winter on record in Anchorage, the warmer weather has been refreshing. 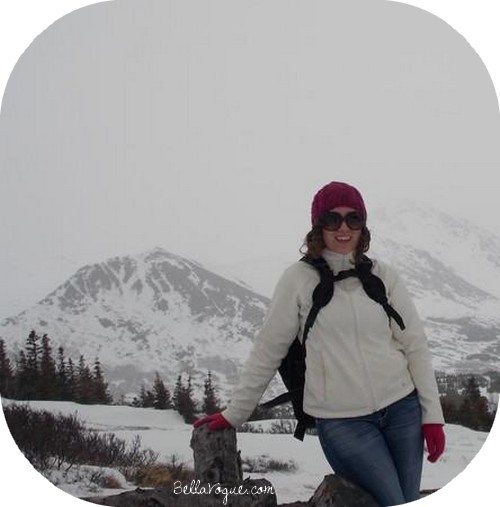 What Spring? While hiking around Chugach State Park two weeks ago.

Friends, you should note that with "warmer weather," I mean highs in the 60's. A lot of people have been asking how I've adjusted from the warm weather of Texas to the cooler Alaskan climate.

Let me tell you: this past winter season was my first in five years. Having grown up in Montana, I am not a stranger to snow. Despite that, I had forgotten how to live in a cold weather climate. Let's just say the past nine months have been an adjustment. I throw around the word "acclimating" a lot. The problem is, I haven't acclimated just yet. 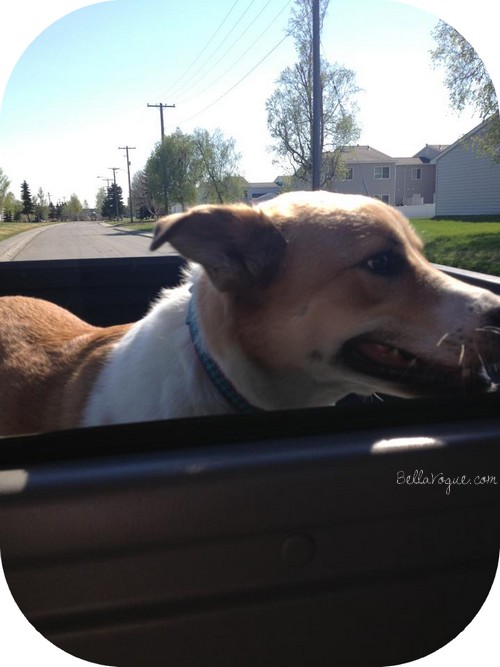 Biscuit has acclimated! She has also learned how to ride in the back of John's truck.

I guess the toughest part about adjusting to the weather has been changing my diet to ensure that I don't gain weight because of the cold. I have been a gluten-free vegetarian for almost five years. I chose this particular lifestyle for personal health reasons. After a lot of thinking, I recently reintroduced fish back into my diet. This now means I am a pescetarian; someone who abstains from eating all meat and animal flesh, with the exception of fish. The decision was not the easiest: while Hubs was deployed, I actually lived as a vegan. 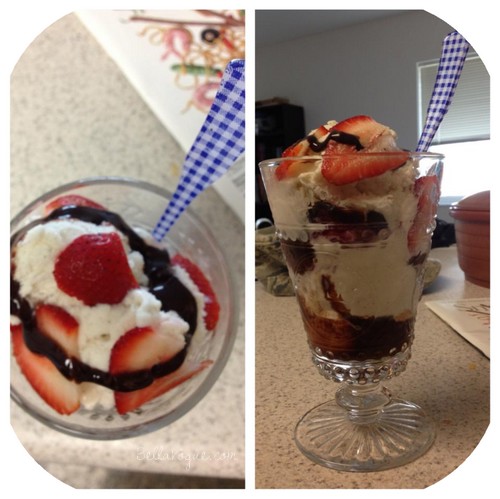 If I were vegan, I could not enjoy my homemade sundaes.
This particular one has chocolate syrup, strawberries, and vanilla bean ice-cream.
Glass from Nordstrom; Spoon from Anthropologie.

Three things came to me when I decided to start eating fish again:

First, fish is a local product here in Alaska. By eating fish from the state of Alaska, I am helping the local economy.

Second, economically speaking, it's easier for Hubs (who eats meat) and me to share a few more foods within our diets. Hubs doesn't have to be gluten-free, so we buy separate breads and cereals. He has started drinking almond milk, among other things, which I appreciate. Grocery shopping has become less of a hassle now that I've started eating fish again.

Lastly, because I became a vegetarian for various health reasons, I can now say that the main reason I became vegetarian is now irrelevant. Last year, when I had to go through the process of being medically cleared to make the move to Alaska (the government considers Alaska military bases to be overseas, or OCONUS, so spouses and dependents need special medical clearance), I learned that the health problem that drew concern is now gone. I will never start eating red meat or fowl again, but it is a relief to know that my efforts to live healthy are paying off.

Speaking of living healthy, I gained about 15 pounds last year when I moved to Alaska. I'm happy to say that, since the beginning of the year, I have shed that extra weight and then some. Hubs and I are going to visit my California family in July, so I recently made a few purchases just for the vacation. I was shocked to see how many inches I have lost. Words cannot describe the joy I felt trying on swimsuits, especially the little Badgley Mischka number I ended up with. I cannot wait for next month! 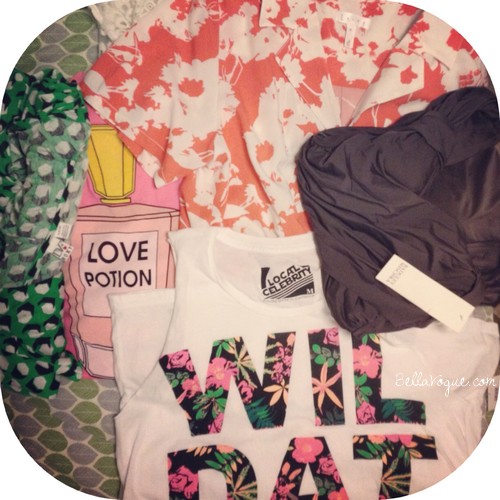 Things are slowly starting to come together again in my life. It's taken a few months, and having Hubs deployed was not easy. I am lucky to have him home again. Since he's been home, we've been discussing whether or not I should get my Master's degree at University of Alaska-Anchorage. I keep going back and forth on whether to pursue my MBA, or receive a Master's in the Art of Teaching. It will be fun to figure out which path I should take.

Until then, I am going to enjoy my first Alaskan summer. 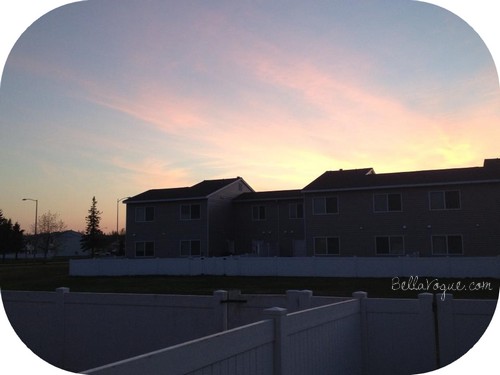 The sun starts to make its presence known at 4:30 am.
Cheers, That Chelsea Girl™ at 5:58 PM 3 comments Labels: a look into my closet, Alaska, Anchorage, Anthropologie, I spy, Nordstrom
Email ThisBlogThis!Share to TwitterShare to FacebookShare to Pinterest
Older Posts Home
Subscribe to: Posts (Atom)
All content, unless written otherwise, is property of Chelsea Hands.
Use of author's personal photos is strictly forbidden.